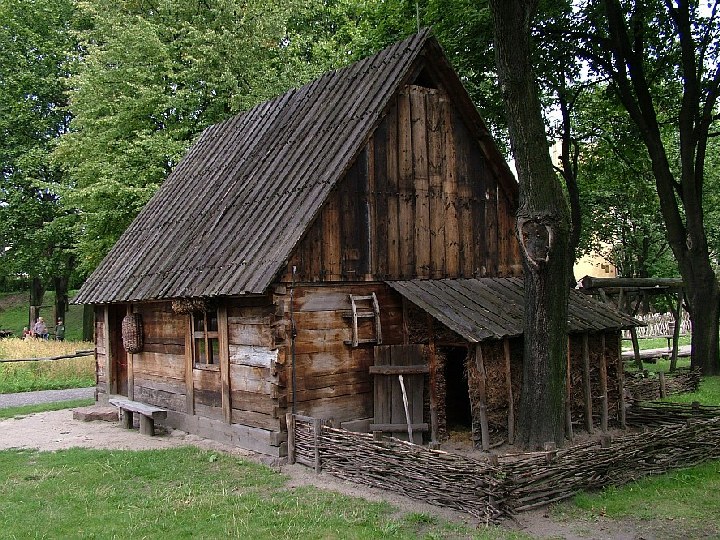 The chimneyless cabin, the second half of the XIX century, Laski, Bory Tucholskie
The very interesting example of a chimneyless cabin, that is a building without a chimney, without smoke lines. The smoke from an open hearth, on which people cooked food, escaped through smoke openings, located in tops of a roof. 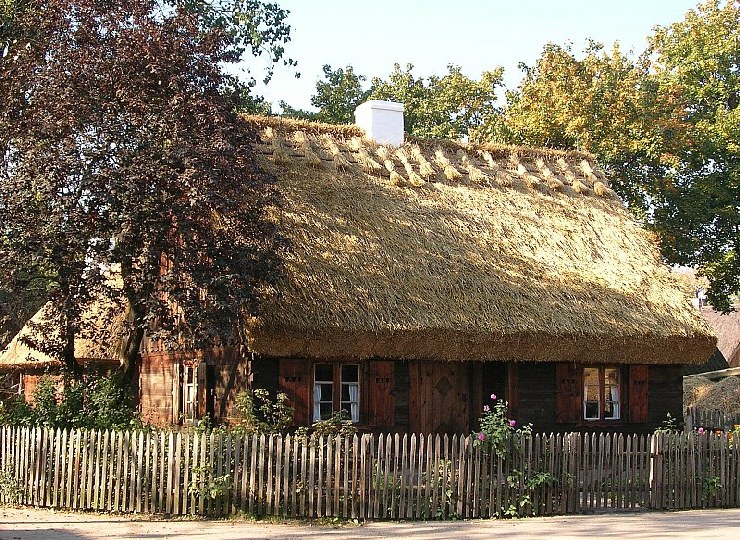 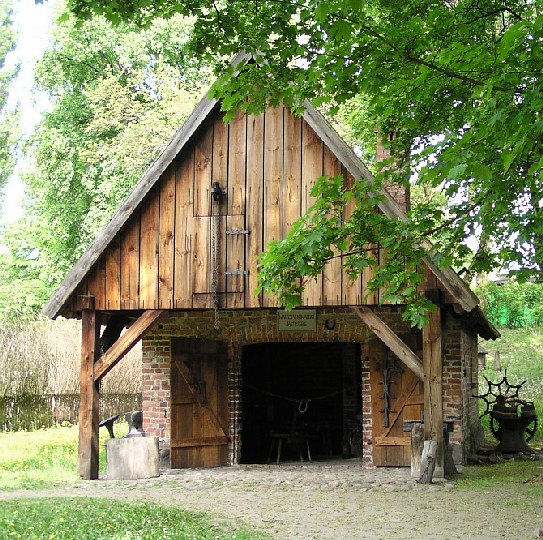 The Smithy, the second half of the XIX century, Jastrzębie, Chełmno District

The workshop interior with a hearth and blacksmith’s leather bellows is full of tools used by a blacksmith in struggles with hard iron. First of all they are different kinds of anvils (in this two – horn dated on 1846), hammers, files, devices for threading, drills, measuring instruments as well as a set of tools to shoe a horse. 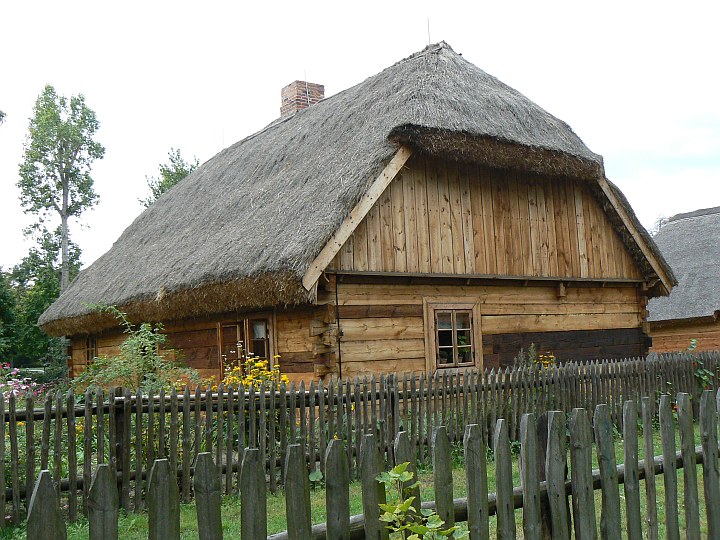 The farm from Kujawy
The cottage, the XVIII and the XIX century breakthrough, Rakutowo.
The barn, 1806 (a reconstruction after fire in 2005), Kowal.
The livestock building, the second half of the XIX century (copy), from Rakutowo.
The granary from Rakutowo, the beginning of the XIX century.
The farm belonged to a rich farmer from Kujawy. In the cottage, in the room fulfilling representative function, there are pieces of furniture made by provincial craftsmen. The windows are decorated with paper net curtains – cutouts.
On the walls there are chromolithographs form the end of the XIX century and paintings about religious subject matter decorated with garlands of paper flowers.
Here we have many family photos, in one there are jubilee celebrators on the day of “Golden Wedding”, with commemorative canes. 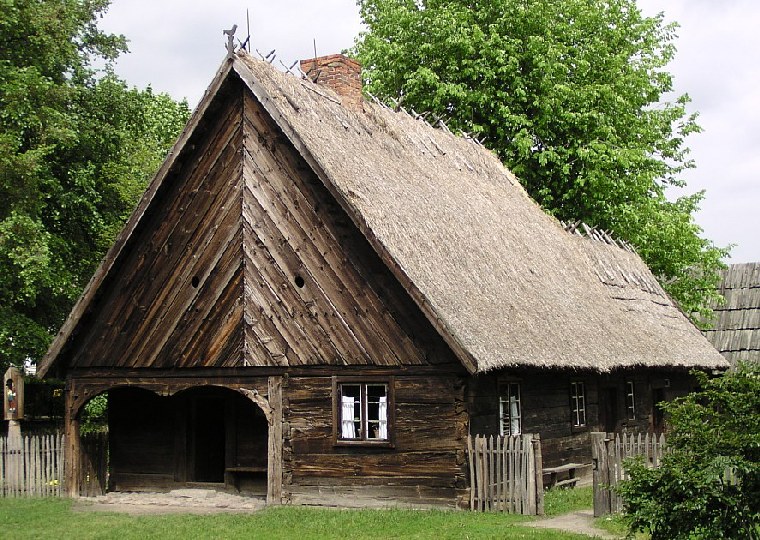 The farm from Bory Tucholskie

The cottage with a stable, the first half of the XIX century, Sucha. The barn, the beginning of the XVIII century, Mikołajskie. The livestock building, the beginning of the XIX century, Mikołajskie.
In the magnificent arcades hut of a rich farmer pay your attention to a painted chest and a cupboard from the end of the XIX century. The hall, where people kept provisions and food products, is full of essential in a household (a farm) equipments – for example hollowed out troughs, kneading-trough for bread, stępa (an instrument for making groats), scales, a stump with an axe forokrasa (animal fat), an instrument for pigs hanging, and also yoke for water, a mousetrap, a hand mangle with a roller. The barn from Mikołajskie village comes from the beginning of the XVII century and it is the one of the oldest kept objects of wooden economic building is northern Poland. 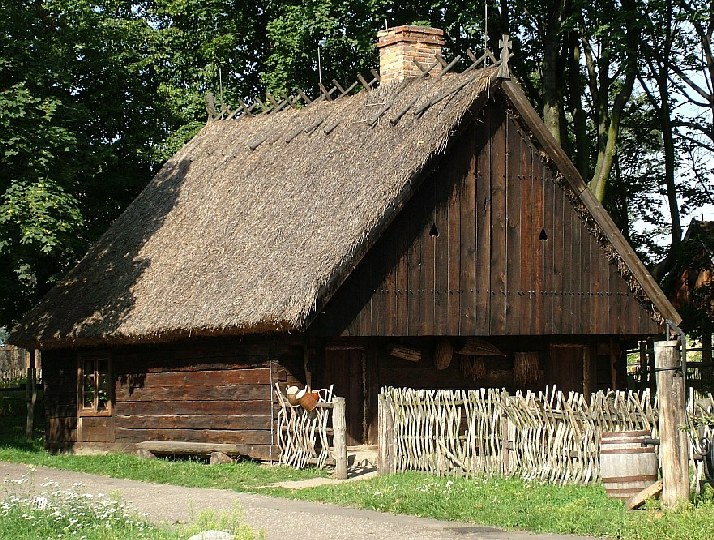 The farm from Kaszuby
The cottage, the beginning of the XIX century, Męcikał. The livestock building, the beginning of the XIX century, Kłodawa.
The exposition illustrates life conditions of multi-generation family, husbanding on about 4 morgi (about 1 ha) of a ground rented from rich Kashubian farmers. The source of receiving food was also lake fishing as well as picking and drying mushrooms, nuts, forest fruit. The oldest woman in a family (a grandmother) treated people with herbs. 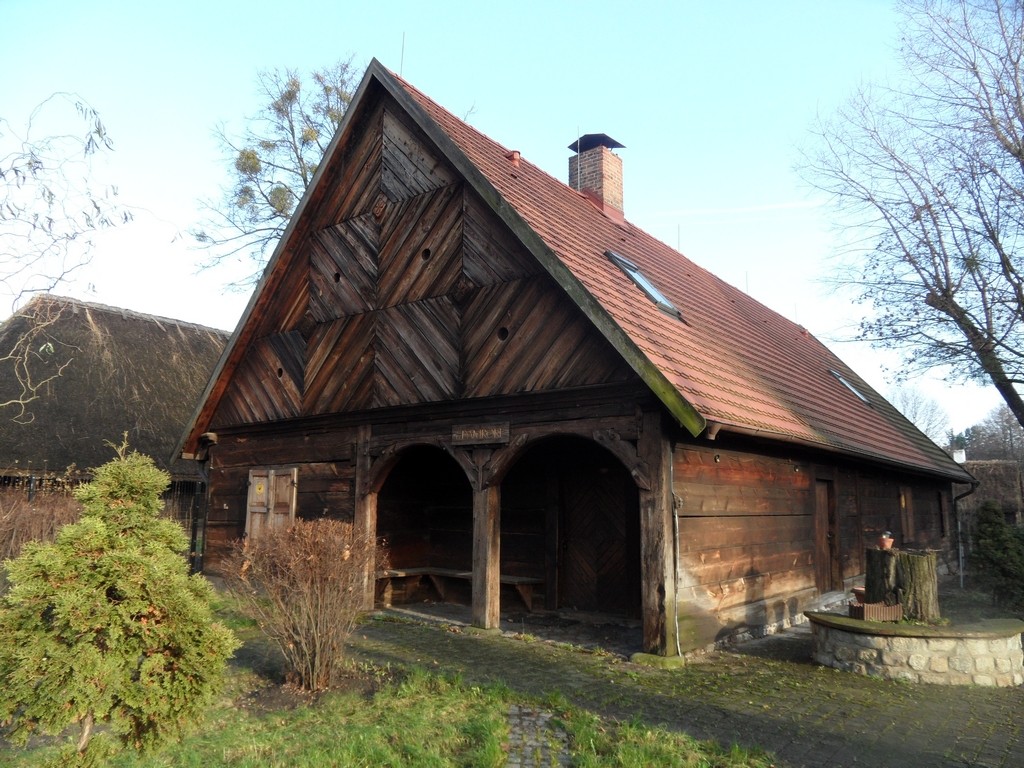 The cottage, the end of the XVIII century, Granowo, Kaszuby
A habitable hut, after transfer to aheritage park, was adapted to “At Damroka’s Inn”. Making your way towards to a restaurant interior, it’s worth stopping in certain distance and pay attention to harmonious proportions of walls and a roof height, decorative two-span arcades as well as patternd boards of the top of the roof. In such a beautifully constructed architectural composition of arcades came into being the place, where also today, like many years ago, you can rest, chat and eat something. 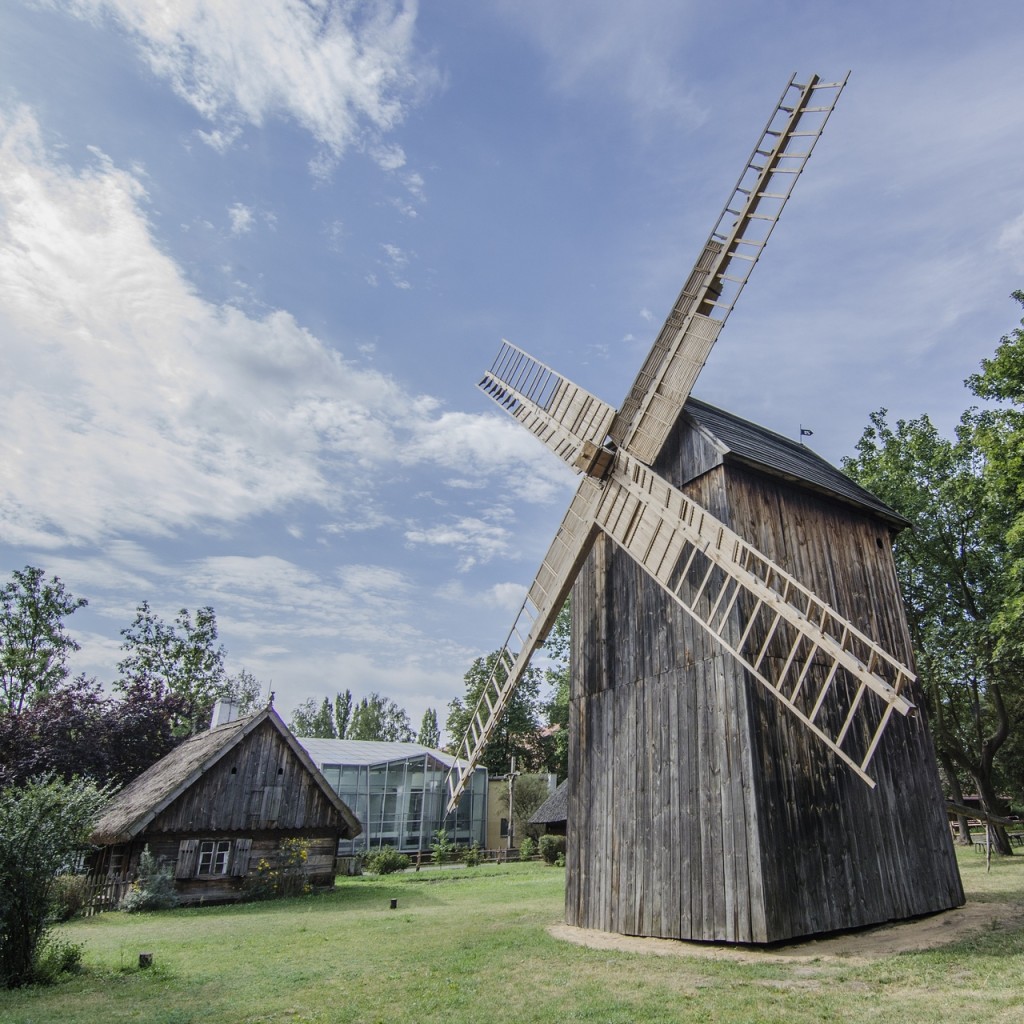 The Koźlak windmill, 1896, Wójtówka, Kujawy
The windy mill, made available to sightseers in our Museum in 1991, belonged to several millers’ generations from Salomoński family. The owners were good carpenters and constructors, they bought or they constructed new devices by themselves, they introduced many improvements. Thanks to that over a hundread-year-old windmill is efficient till today, it amazes a superb condition of original, archaic devices kept. And its history is really fascinating… 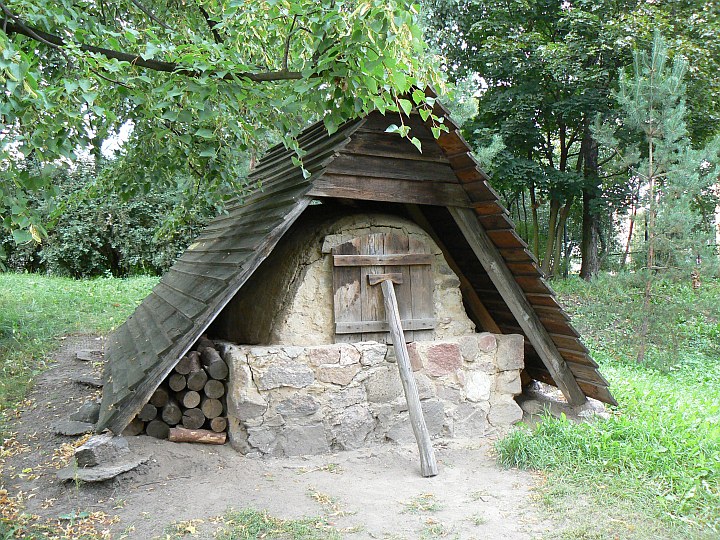 The detached bread stove, the end of the XIX century, a reconstruction, Kaszuby
The detached bread stoves were built on a field or in an orchard besides the house. Larger farms or several families used them. Rich Kashubian farmers put this type of stoves in their farms, in order to draw additional earnings. In order to heat with a stove they used pine wood, peat cubes, sometimes straw. The stove was heated about 1 hour. The batch of bread lasted from 1,5 hour to 2 hours, what was dependent on a kind of dough and size of loaves.

The water mill, the beginning of the XX century, Strzygi, Dobrzyń District
The mill was located behind Strzygi village, by an unnamed stream. The Museum bought it in 1990 from the last owner, who still worked inside the mill till spring the next year. After a demolition and transport to a heritage park, the building was assembled, recreating additionally the part of older devices on the basic of a documentation from 1926. 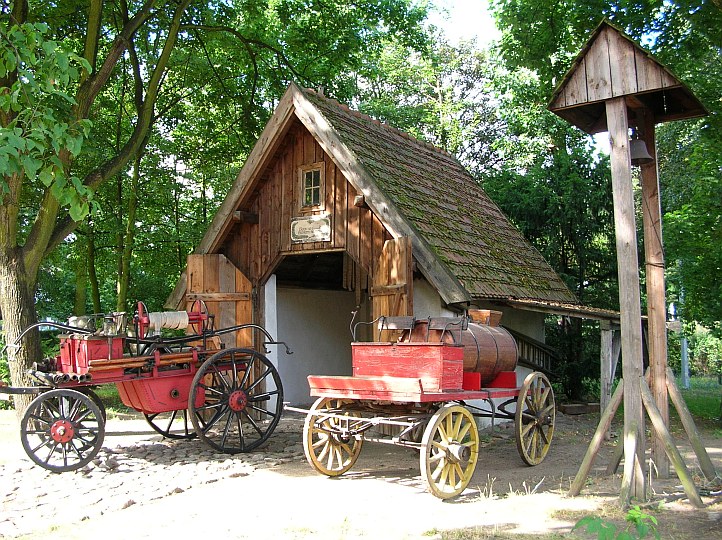 The fire station of Voluntary Fire Brigade, the beginning of the XX century, Pływaczewo, Chełmno District.
The antique fire station served firemen for several decades, in 1990 it was transferred to our heritage park. The very valuable horse fire engine from the XIX and the XX century breakthrough pays your attention. The hand portable fire engine from the beginning of the twenties the XIX century and a magnificent water-cart from 1911 are also interesting.